A few times, over the past few weeks, I've seen a particular friend of mine, and he's had a game with him, a game called Spot It. It takes the form of a bunch of cards, each of which has eight different symbols on it; the game mechanic depends on the fact that each pair of cards has exactly one symbol in common.

It's trivial to deduce what the 'missing' cards are, and, with them added, it is then a 57-card deck with the same property; that any two cards have exactly one symbol in common.

Then I noticed that 57 equals 57. That is, that the number of cards in the 'complete' deck equals the number of distinct symbols. Then, I drew up a 57x57 matrix, where one axis is card identity and the other is symbol identity. It looks symmetric enough, and, on checking, it turns out that the "one bit in common" property holds in the other dimension too (which means, mapped back into cards, that, for every pair of symbols, there is exactly one card that has both of them).

Then a few questions (paraphrased):

I added a question of my own.

I found question E interesting because it implies that there is a bijection between cards and symbols with nice properties;* in particular it relates these card games to certain regular graphs of diameter $2$. More on this later.

Here's an example of what we're talking about. The triangle game has cards $a,b,c$ and symbols $\alpha,\beta,\gamma$:

In the dual game, the card $\alpha$ has symbols $b,c$ because those were the cards with the symbol $\alpha$ in the original game. Notice that in this case, the dual is essentially the same game: there's a bijection $$\varphi = \{~a \mapsto \alpha,~b \mapsto \beta,~c \mapsto \gamma~\}$$ such that a card $x$ has a symbol $\varphi(y)$ if and only if the card $\varphi(x)$ has the symbol $y$ in the dual game. This relates to the fact that the incidence matrix is symmetric:

It's usually a good idea to come up with some notation.

Interpret $C$ as the set of cards, $S$ as the set of symbols, and $x \in \sigma$ as "card $x$ has symbol $\sigma$". The bit about domains and ranges means there are no "blank cards" or "phantom symbols" - every card has a symbol, and every symbol appears on some card.

Definition. A Card & Symbol Game (or CSG) is an incidence structure such that

Some more definitions will be useful for our investigation:

Definition. An incidence structure is square if there are the same number of cards and symbols (i.e. $\#C = \#S$). Call this $\prop{SQUARE}$.

Definition. An incidence structure is regular if the number of symbols on each card equals the number of cards with each symbol, and this number is at least $2$. Call this $\prop{REGULAR}$.

Obviously $\mathcal{G}^{\star\star} = \mathcal{G}$. It will be useful to have a notation for dual properties:

Obviously $[\mathsf{P}^{\star\star}] \equiv \prop{P}$. Due to the symmetry between cards and symbols in their definitions, $\prop{SQUARE}$, $\prop{REGULAR}$ and $\prop{SELF-DUAL}$ are each equivalent to their dual properties.

We'll be interested in finding more logical connections between these properties; let's write $\newcommand\infer{\vDash} \prop{P} \infer \prop{Q}$ to mean that $\prop{Q}$ can be inferred from $\prop{P}$.

These will be useful later.

We turn our attention now to projective geometry. The reason for this will be immediately clear:

The words "point" and "line" are deliberately undefined - we can interpret them in a geometric sense (if we're generous about how straight a line has to be): 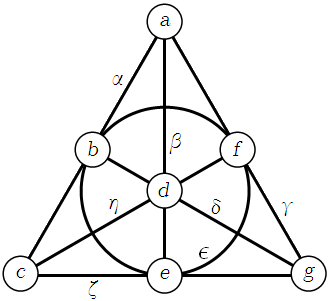 This is the Fano plane, the smallest FPP. But we could instead define "point" to mean card, and "line" to mean symbol, and then we can draw the Fano plane as a card game diagram:

It's easy to check that the Fano plane is a CSG, and isomorphic to its dual (which is also an FPP),

In fact, every FPP is a CSG, and its dual is also an FPP. Let's prove this.

Proof. We only need to check $\propd{NON-DEGENERATE}$.

Lemma. Every line in an FPP contains at least $3$ points.

By the dual lemma, every point lies on at least $3$ lines.

Lemma. For any two points in an FPP, there is a line containing neither.

By the dual lemma, for any two lines, there is a point on neither.

Proof. We have $\prop{1-COMMON}$ already, so we only need to check $\prop{UNIFORM}$: that every point is on the same number of lines.

The problem right now is that the dual of a CSG is not necessarily a CSG; $\mathcal{C}_n^\star$ satisfies $\prop{UNIFORM}$ but not $\prop{1-COMMON}$, for example. Worse still, call this one $\mathcal{L}_5$:

This CSG is uninteresting because the common symbol is always $\Omega$. Nonetheless, it's a CSG by our definition, and the dual game

A better approach would be to try to isolate what it means for a CSG to have "missing" cards, and then relate this to "completeness". We'll consider a CSG to be "complete" if it satisfies $\propd{UNIFORM}$ and $\propd{1-COMMON}$, i.e. every symbol appears on the same number of cards, and every pair of symbols appears together, as in the completed original game. Conveniently, this is exactly $\propd{CSG}$.

Definition. A CSG is complete if its dual is a CSG. Call this $\prop{COMPLETE} \equiv \prop{CSG} \land \propd{CSG}$.

A completion is an expansion which is a complete CSG.

Definition. An incidence structure is CSG-expansible if it has a non-trivial expansion which is a CSG. Call this $\prop{CSG-EXPANSIBLE}$.

An incidence structure is completable if it has a completion. Call this $\prop{COMPLETABLE}$.

So extensions and expansions may add more cards and more symbols, but an extension might add new symbols to existing cards, whereas an expansion cannot change any existing cards. An expansion is trivial if and only if it adds no cards. A completion need not be non-trivial, so $\prop{COMPLETE} \infer \prop{COMPLETABLE}$.

Now let's try to answer some of the questions.

Theorem. An incidence structure is a complete CSG if and only if it is either an FPP or a triangle.

This answers the first part of question B: all FPPs with $n \le 10$ are known, and there is no FPP with $n=6$, so there is no complete CSG with $7$ symbols per card, for example. $n$ is called the order of the FPP.

Corollary. Every complete CSG is regular.

Proof. $\prop{FPP} \infer \prop{REGULAR}$, and the triangle is regular. $\square$

Corollary. Every complete CSG is square.***

This answers question D: no, if the CSG is complete then we can't add more cards and still have a CSG.

Proposition. Every self-dual CSG is complete.

To answer question E: the particular card game introduced above is a complete CSG with $8$ symbols per card, so it is isomorphic to the unique FPP with $n=7$, which is self-polar. However, there are complete CSGs which are not self-dual, the smallest two of which are isomorphic to a dual pair of FPPs with $n=9$, so they have $91$ cards each with $10$ symbols.

There are $7$ others of the same size, up to isomorphism.

Returning to the start of this post, our correspondent also noted that (in other words) there is a one-to-one correspondence between CSGs and constant-weight codes for which each codeword has Hamming weight $n+1$ and each pair has Hamming distance $2n$. We've shown that complete CSGs are almost exactly the same thing as finite projective planes; another closely related area is the study of symmetric block designs, which (for $\lambda = 1$) are exactly the same thing as complete CSGs, although this result is a theorem rather than by definition.

I said we'd come back to regular graphs with diameter $2$. If the incidence matrix of a CSG is symmetric (i.e. the CSG is self-polar), then we can interpret it as the adjacency matrix of a graph in which $x,y:C$ are joined by an edge if and only if $x \in \varphi(y)$. In this context,

For $x \in \varphi(x)$, the graph has an edge from $x$ to itself, and self-edges may be used to form routes.***** This gives a correspondence between self-polar CSGs and graphs of this form. Here's the graph corresponding to the Fano plane: 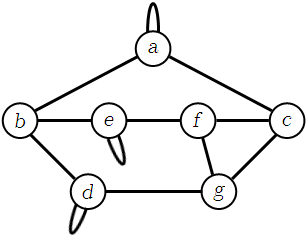 Another thing you can do with CSGs is colour the edges of complete graphs such that the monochrome sets are themselves complete graphs. The colour of an edge joining two cards is given by their unique common symbol. Here's the Fano plane again, with the symbols $\alpha,\beta,\ldots,\eta$ in order of hue: 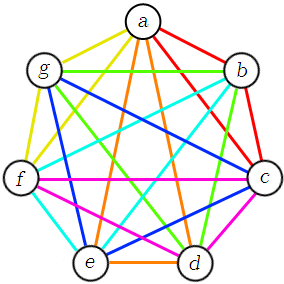 *Combinatorics would greatly benefit from a theorem which says "if two sets appear near each other, have the same cardinality, and this cardinality is an unusually mundane number like $57$, then there is a natural bijection with some nice properties which explains why this has happened."

***Ryser's theorem gives the converse: every square CSG is complete!

*****The friendship theorem implies that the only such graph with no self-edges is the triangle. This is a corollary of the fact that every polarity $\varphi$ of an FPP has an absolute point $x:P$ such that $x \in \varphi(x)$.